The Biggest Kind of Little

You know, I have never felt smaller than I did when I was trying to be a big name. Now I am a small name, and I have never felt bigger. HUGE love to Nancy Golden and the entire Carrollton League of Writers, and big congrats to Jennifer Rabey Crippen, Lauren Bass, and all the winners. It is an honor to be adjacent to your greatness! 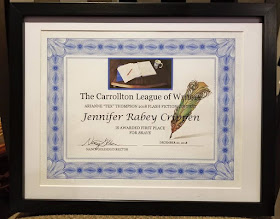 Rapping on the A-Train

So while I was in San Francisco, I took the subway to go visit my friends. It was the end of rush hour, so not very crowded once we got into the city proper. Then a guy got on, carrying a little portable speaker and a microphone, and arranged his gear in one corner.

And then he started rapping.

The song was something about peace and harmony - it wasn't very loud, and I couldn't quite make it out. Of course, my first thought was "God, what a jackass. Doesn't he know nobody wants to hear that?" 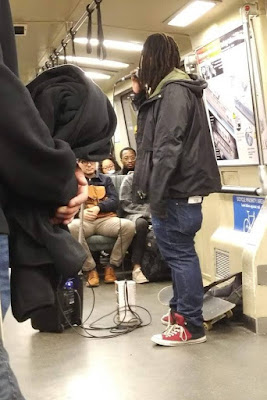 When he was done, he walked up and down the aisle, soliciting donations with his white-papered can. Everyone ignored him. And my second thought was, "How pitiful. This is like, the saddest and most awkward thing I've ever seen."

He got off at the same stop I did, but before I headed up the stairs, I waited - and watched him get on another train heading back the way we had just come. His microphone fell and dragged on the ground as he boarded, and my last glimpse was him gathering it up and turning on his speaker as the train doors closed behind him. And my third thought was, "Oh God. That is me. That is what I do. That is what my author-friends do. We are all just hapless schmucks belting our hearts out to a crowd of indifferent strangers and trying to get paid for it."

So today's thought is: let's do what we can to be kind to each other. Some of us are more skillful or subtle about it than others - but at the end of the day, most of us are just rapping on the A-train.
Tex at 4:52 PM 1 comment:
Share

The Seminal Seniors of SMOFcon

On the bus back to San Francisco after a fantastic too-short weekend at SMOFcon (The SMOFs, of course, are the Secret Masters of Fandom). It's a "convention runner's convention", where the programming and presentations are all about hotel negotiations, crisis management, codes of conduct, and so on. But it's also a fraternity of sorts, with traditions both hallowed and deeply silly. 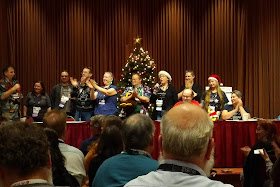 I tell you what, though: for me, the coolest thing was to sit down at a workshop about social media, or software migration, and see that both the presenters and a good majority of attendees are people my parents' age. They did not grow up with any of this stuff. They might not ever use Twitter or Instagram for personal enjoyment. But they are passionately dedicated to mastering it and sharing that knowledge, because that is what their event and their fan community needs them to do. And I am so grateful that they are willing to keep carrying that torch forward, especially when so many people of my generation don't yet have the financial security or free time that you absolutely have to have before you can consider taking up the reins on an all-volunteer nonprofit event that's going to involve a thousand people, a quarter-million dollars, and over a year's worth of planning.

Now I leave much gratified and more than a little lonely. My commitments to my own little community mean that I don't have the bandwidth to even attend, much less help out with, the fantastic conventions they're building out for next year and the ones after. But friendly friends - if you are ever tempted to doubt or despair, go listen to Ray Stevens' "Shriners Convention" and know that our reverend elders are doing tireless good work that is almost entirely invisible to the outside world... in between running late-night "statistics and probability seminars" with a nickel buy-in :)
Tex at 4:46 PM No comments:
Share
‹
›
Home
View web version