Take a hike, Hugo Awards. Smell you later, New York Times. Today, I have officially Made It - because today, I have become a Halloween costume. Love you to the moon and back, Anne!
(I dressed up as a muggle. Shirt by Jodi Thompson . Body by McDonalds.) 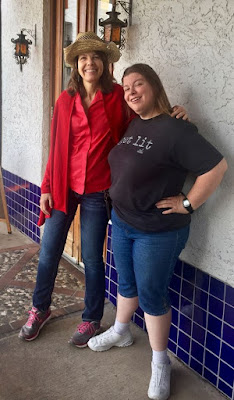 I have no idea why. Can't take credit for having unbearably great parents and upbringing. Maybe living as a sedentary suburban nun had something to do with it - I never drank or dated, didn't socialize, lived at home until I was 24. It probably helps that I live in a fat suit, make zero style effort, and dress like a fourteen-year-old boy. (Thank you for loving me anyway.) Also, having mostly dude-friends for the first 20 years definitely equipped me with a "one of the guys" cadence, which may put out dickhead-deterrant signals I'm not aware of.

Anyway - nobody should apologize for having a great life. I'm just sorry I haven't had more to say when this subject has come up previously. I'll try to be a better listener and advocate. Regardless, please let me know whenever I can send some surplus goodness your way: if there's one thing I love about being human comfort food, it's getting to share it.
Tex at 7:43 PM No comments:
Share

Writers in the Field in the Books!

I don't have any photos of Writers in the Field, partly because we were using my phone as a wifi hotspot for the ticket booth. But here's some of what's been filling up my feed over the past couple of days. 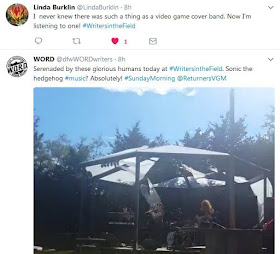 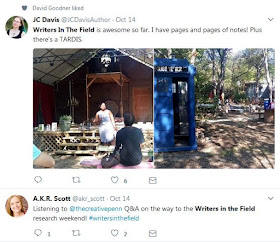 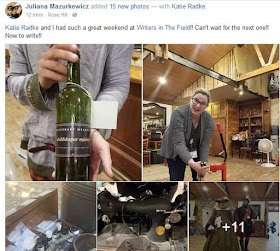 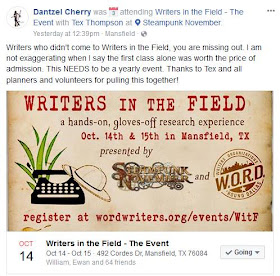 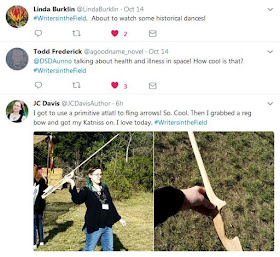 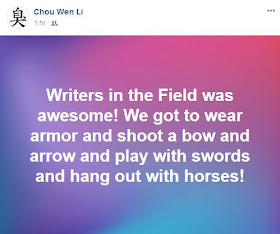 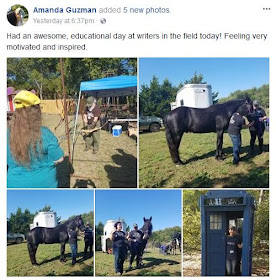 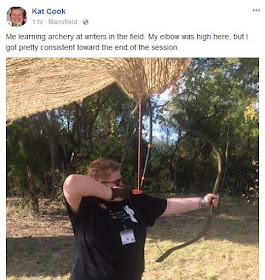 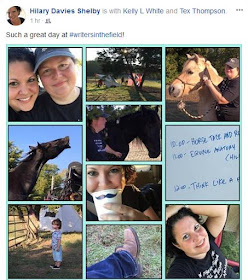 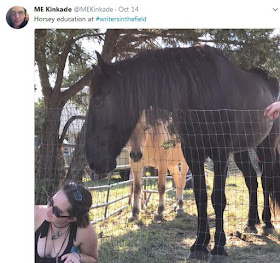 And really, you guys. I already knew Shane Richmond and Leslie Richmond couldn't put on anything BUT a phenomenal show. I already knew that Marsha Hubbell and Sarah Hamilton and Daniel Wells and the rest of the WORD crew would ride-or-die to make it happen. And I was *pretty* sure that William Humble would do the hardest job - namely, translating and diplomatically buffering between the word-nerds and the sword-geeks - with his inexhaustible good humor.


But even so, I was knocked acock by the enormity of the enthusiasm we generated this weekend - on all sides. People like Lauren Liebowitz and Kelly L White and Dominick D'Aunno dropped everything and diverted to WITF to showcase their particular expertise. People like LB Clark and Misty Ellen Mikes and Sanan Kolva moved heaven and earth (and literally slept in their cars) to get themselves here to drink it in. And people like Pamela Skjolsvik and LeAnn Robinson and Alicia Holston have graciously endured the most monstrous neglect while we threw 110% into making this thing happen. (I'm done being a zero, you guys - I promise.)

Usually after I get home from a big event weekend, I hit the emotional skids in a big way - as if I've used up a month's worth of joy in three days, and wake up afterwards with a horrible serotonin hangover. But this doesn't feel like the end of the show. It feels like we've just tossed a match into a whole fountain of good-will gasoline.

We made us some magic here, y'all. We started something huge. And I SO appreciate all of you who came, who helped, and also who dauntlessly led the cheer squad (Jennie A Komp, Jenny Hanniver, I'm looking at you!) New things always need extra love, whether they're animals or human beings or stories or ideas, and that extra helping of faith and affection has made all the difference today.
Tex at 7:39 PM No comments:
Share

I woke up today and was 35. (You're not supposed to put that kind of info out on the Internet, but Equifax has already scrawled my data on every virtual truck-stop toilet wall from here to China, so whatever.) I would like to celebrate by taking off the professional enthusiast's hat for a minute and indulging in some reflective realness.

Lately, my entertainment indulgence has been watching the infuriating greatness that is Silicon Valley. And despite my aversion to cringe comedy in all its forms, MAN do I empathize with Richard. Working 80-hour weeks for months on end with a ragtag bunch of iconoclasts who have somehow bought into your mapcap vision? Constantly circling the drain, curling up in a fully-clothed fetal position in the bathtub, convinced that THIS time you really are fucked? Absolutely SURE that you could knock the world on its ass, if only you could stop being your own worst enemy long enough to make it happen? Oh yes.

Granted, I haven't invented a revolutionary compression algorithm, and my little proto-company isn't getting multimillion-dollar funding offers. Nor can I pretend that any of what I'm killing myself trying to do will ever put a roof over anyone's head. Honestly, it's a great day for the WORD crew if we can throw a good party and still break even. And sometimes it's hard to justify the effort, if it's never going to make you rich OR save the world.

But I gotta have something to hang my hat on in order to keep moving forward, and lately - in the year of our lord 2017, in which we're all stumbling through a neverending shit-blizzard of murder-suicide madness - it's this:

You know who doesn't tend to end up as a mug shot on the evening news? People who can take pride and pleasure in what they do - whether it's writing or gardening or fixing houses or dressing their dog up as Batman.

And I worry that we're losing emphasis on doing in favor of *being* - in favor of swearing allegiance to a group, a tribe, a label, and then walling ourselves up behind like-minded individuals and the institutions who cater to them. You'll never hear me say that being and belonging isn't important - shit, I spent three books exploring just that - but my notoriously unbalanced self is at least Libra enough to commit to tipping the scales back toward the joy of doing.

Because people who feel like they're accomplishing something, be it ever so small or silly, are so much less likely to hurt themselves or others. The demons that haunt creative people are real and dangerous, but not as dangerous as those who whisper to people bereft of purpose.

So that's why we're doing WORD, concocting all these madcap schemes to get writers fired up and connected. That's probably why you and I are friends. And that's why I'm so glad that you are still out there fighting to do the things you care about, even when it feels like you're killing yourself just to tread water.

Hang in there, y'all. Do your small things with great love, and try to make sure that at least some of them are projects of your own devising. It's the only way I've found to make all the tired worthwhile.
Tex at 7:27 PM No comments:
Share

Man, I'm going to regret writing this. But here goes.

Sooner or later, we all have to take a turn defending the status quo. And it sucks.

Sooner or later, something (or someone) crucial to our value system is implicated in a disaster or a tragedy, and we have to take a turn in the cognitive hot seat, saying "well, let's not be hasty here - you can't use this as an excuse to XYZ - the *real* problem is ABC."

Nobody likes to be in the hot seat. Nobody likes to be put on the defensive. And in moments like those, our brains actually, literally defend our worldview harder than ever. We double down as instinctively as a pill-bug rolling up under a three-year-old's inquisitive poking. It's what we're neurologically wired to do.

Today a white guy with a shitload of guns is in the spotlight, and the right is on the defensive. Eventually there'll be another ISIS attack, and the left will take its turn.

But y'all - the thing I wish we could ALL do? (Besides hold hands and sing kumbaya.) Is understand that when we say "well, hang on - you can't just up and ban these people/things - that would be a betrayal of the greatness America stands for" - what everyone on the other side of the fence hears is "and that's why we have to let this keep happening."

(Example du jour: "it's not guns, it's mental illness" - but I'll wager the percentage of the people saying that who have personally called, written, and/or voted to advocate for improved access to mental health care is slim at best. The left-side equivalent is probably "it's not Muslims, it's radical Islamic terror" - which rarely comes with a solution more nuanced than "pull out of the Middle East and hope that in twenty or thirty years everybody will have settled down and stopped hating us.")
And that's why your argument wins no converts.

I wish our neural wiring would allow us to straight-up admit our feelings this way. I wish we could psychologically afford to stand up and say "I accept this blood as the cost of doing business." I mean shit, maybe we can. We've long since done it with cars. Being an automotive society means that there WILL continue to be fatal accidents, DUI manslaughter, kids forgotten in hot cars, and cars/trucks used as weapons of terror... but the only way to completely prevent those deaths is to stop driving, and we are not willing to do that.

That does not mean we're bad people. It means we've weighed up the pros and cons, and accepted a certain number of auto fatalities as the cost of doing business. We'll happily do what we can to *minimize* that cost (what company doesn't want to reduce its operating overhead?) - but only so long as it doesn't impede the business itself.

So when your goal is to vent, to commiserate with the other people on your team, to express your feelings - absolutely go for it. No criticism here.

But whenever it's your turn in the hot seat, and you feel obliged to defend the value/importance of your thing to the unpersuaded world at large, your efforts will be so much more fruitful if you start by acknowledging its cost.
Tex at 7:09 PM No comments:
Share
‹
›
Home
View web version