Just a Little Pat on the Back(yard)

I saw an article in the NYT today about a restaurant in Japan, operated by a senior care specialist, that makes special gourmet meals for people who can't chew or swallow well. It's high-quality food that's artfully arranged and presented, so it looks and tastes like first-class fare - a big deal for older and disabled people for whom eating is a crucial pleasure.

I also saw a video this week about a guy who had a horrible time in foster care as a kid. Now he's adopted four of his own, and started a company that makes "comfort cases", so foster kids don't have to haul their belongings around in a trash bag.

And right here in my own backyard, David Doub is hard at work erecting tentpoles for geeks and creators of all stripes. He runs Dusk Comics, the Creative Women's Conference, the Texas Creative Community FB group, and now he's helping with the Texas Latino Comic Con (and probably even more things that I don't know about!)

And I just love it when somebody sees a problem in their own backyard, suited to their own expertise, and decides to solve it. Fixing the little things is how we fix the big things.
Good job, world. Good job, team. Keep thinking about you-shaped solutions to us-sized problems. We can do it!
Tex at 1:37 PM No comments:
Share

In the Beginning, There Was the WORD

It feels increasingly trivial to talk about writing things these days. But if you’re feeling decidedly ‘whelmed’ by everything else on your Facebook feed, this might be useful to you.

Last year, I decided that it was dumb to live in a metroplex of 7 million people, which probably has about 6 million writers groups, when none of said groups even knew the others existed. We were all just hunkered down in our little bunkers, doing our own thing. To be clear: there is nothing wrong with choosing that, but it isn’t a choice if you have no alternative – if you don’t know even know whether you HAVE neighbors, let alone who or where they are.

So I started visiting every writers group I could find, and at each one I asked: what others do you know of? Who else is out there?

Turns out the answer is, "a whole hell of a lot." 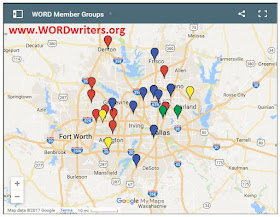 So we made our own little group-of-groups - it's called WORD (Writers Organizations 'Round Dallas).

And by and by, we got some momentum going. We started having monthly meetups where representatives from different groups would all get together and trade event flyers, share news, and problem-solve together. (“How do you prevent brain-drain when your best writers get published and then leave the group?” “What do you do when your critique group gets too big for a single discussion circle?” “Does anybody know a speaker who can come talk to us about Scrivener?”)

Now, a little less than a year later, there are twenty-three groups on the map, and we’re still finding more. We’ve got our first-ever writers group “trade fair” happening next month, which I will wax ecstatic about tomorrow and for weeks to come. Thanks to the visionary Kathryn McClatchy, we’re even getting plans in place to pool our resources and have a big-name author come talk to us later this year (all the way from Australia!) Our new network is still a little speck in the grand scheme of things, but I’m really happy with where it’s going – and I think that if we work hard and play our cards right, we can help make DFW as much of a literary hotspot as LA or Seattle or Minneapolis.

All of which is to say: if you are feeling adrift in this age of millions – millions of marchers, voters, viewers, buyers, and sharers – I really, really recommend finding yourself a real-life mission of dozens. A dozen neighbors is a neighborhood. A dozen students is a class. A dozen relatives is a family. Our brains are wired to interact with and enjoy people in those quantities, in a way that we can’t manage with our 900 Facebook friends. I can make no meaningful difference to a million writers – but twenty-three of us are doing something valuable here in our little corner of the world.

And I suspect that you are *perfectly* positioned – in where you live, what you love, and who you know – to do something right now that no other person reading this could accomplish. Don’t discount that. The smallest, most intense and personal jobs are the hardest to assign, the work of the most priceless people (and if you don’t believe that, when was the last time you got a new mom?)
Your feed is constantly handing you the work of a nation, of a whole society, and that IS important – but please don’t let that be a reason to neglect the work of your own neighborhood. The tasks we assign ourselves are by definition the essential work that nobody else is stepping up to do – and in that, you are irreplaceable.
Tex at 2:00 PM 1 comment:
Share
‹
›
Home
View web version