I shouldn't be writing this. I'm so tired, and I have ten thousand things to do.

But there was a convention two years ago that had me crying for days on the back end, because I knew even then that it was a singular, amazing, never-to-be-repeated event. I tripped over another one this weekend, and it has knocked my emotional teeth out.

On the face of it, it was a pretty straightforward exercise. Fly up to Portland, stay with my legendary lifemate Jennie, and together she and I would go to the Willamette Writers Conference. They set me up to teach one two-part class on Sunday, and the rest of the time was free. So Jennie and I decided to do some volunteering. It was all set up to be a fun, productive time.

It started out pretty ordinary. We did the volunteer orientation on Wednesday night, and then I got to help with pitch desk setup on Thursday while she was at work. We were supposed to work in the bookstore together for most of the weekend.

Then they needed an emcee for one of the "Pitch for the Prize" events on Thursday night, so I signed up for that. (It was a blast - gave me an excuse to reprise the 'world's worst pitch' from DFWcon 2015.) Then on Friday morning they asked if I would work the pitch corral. You know how every flight you take requires a flight attendant to first give the schpiel about how to buckle your seat belt and where the emergency exits are?  This was that, but for a roomful of writers waiting to go in and pitch to an agent. The main difference is that instead of being ignored by people on their smartphones, you're talking to thirty desperate creatives on the edge of a nervous breakdown.

And somehow that became my entire weekend. Every ten minutes on the dot, we started the pep rally all over again.

Welcome to the Hunger Games, career introvert edition! Who's here to pitch to a film or TV agent? Excellent - District 1, head to the right. Who's here for a literary agent? District 2, to the left! You will enter here, through the Door of Destiny. When your time is up, you will exit to the left, through the Portal of Glory, smeared with the blood of your enemies and the last burning shreds of your self-doubt. Take a moment to prepare yourself: fly-check, cry-check, phone-on-silent-check. Good? Good. Now rise up to meet your destiny, word-warriors - your time begins as soon as this door opens. No shame, no surrender, and may the odds be ever in your favor! 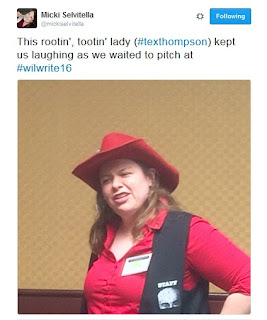 It was fun in the moment - fun to talk to people about their story or listen to their Texas jokes or see pictures of the dogs or kids waiting for them back home. We joked about turning this whole pitch thing into a drinking game and shared horror stories about the wild speed-dating scrums from other conferences. And when someone came back waving a business card and vibrating with giddy disbelief, they wafted their good luck all over the people still waiting to go in. It was an incredible rush - the kind of wire-tight camaraderie you get among people who are all waiting to parachute out of an airplane. As the weekend wore on, the hugs and thank-yous piled up.

Then during Sunday's lunch, Jennie texted to say that they needed me in the ballroom ASAP. I thought something had gone seriously pear-shaped. In hindsight, I should have known better.

The thing I want to emphasize here is that there was no awards presentation going on. This was not part of some kind of pre-planned ceremony. There were the usual lunch announcements - room changes, deadline reminders - and then I was up on stage, being named "sheriff" of the Willamette Writers Conference, and getting my badge pinned with a Portland flag.

I'm siting here groping for a way to keep this post from becoming an exercise in self-congratulation. That's really not what I'm trying to say. I keep thinking about what a fantastically fun, well-organized event this was, and how warmly the conference committee bent the rules and folded Jennie and I into the tribe (technically only WW members can volunteer), and how glad we both are that they took a risk on us. This conference has catapulted both of us forward in our respective life-goals.

But like... I do a lot of conferences and conventions. I'm used to teaching classes and moderating panels and getting compliments on my work. I think what makes this feel so revolutionary is that it's the first time I've gotten to be with someone during a potentially pivotal moment in their life and say with the voice of experience,"don't worry - you got this." I know it's small compared to what a delivery nurse or a crisis hotline operator does, but right now, today, it's the biggest thing in my world. Who would have thought that being the rodeo clown could be more fun than actually riding the bull?

And what REALLY gets me is that it almost didn't happen. I almost said, "I can't afford to give away 40 hours for the fun of it - I'll just sit in a corner and catch up on work." (Makes you think about how many insanely talented people aren't getting heard because they really, literally can't afford that time... but that's a separate rant.)

So I'm going to take this as a sign that I'm moving in the right direction - that if I keep dumping passion out into the world and looking for the places where it's reciprocated, good things will keep happening - that "audacious generosity" really can be a valid career strategy. (And if you're sitting there thinking "How could you have any doubt about any of that?", all I can say is, it's easy to beat up on yourself when you're four months out from a book launch and still haven't gotten around to planning for it.)

So... thank you for everything, Willamette friends - for an incredible conference, a fantastic initiation rite, and a sorely-needed spiritual affirmation. You've wrecked me in all the best ways, and since there's no riding off into the sunset when you're already out on the west coast, you better believe I'll be back. 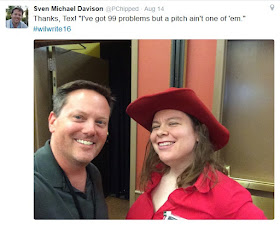