Did you feel that?  That sort of shaky, shifty tremor in the ground?  No, it's not the fracking this time: it's debut author Laura Maisano, getting ready to rock your world!  If you like New Adult, portal fantasy, and things that are awesome, pull up a chair and smell what she's cooking! 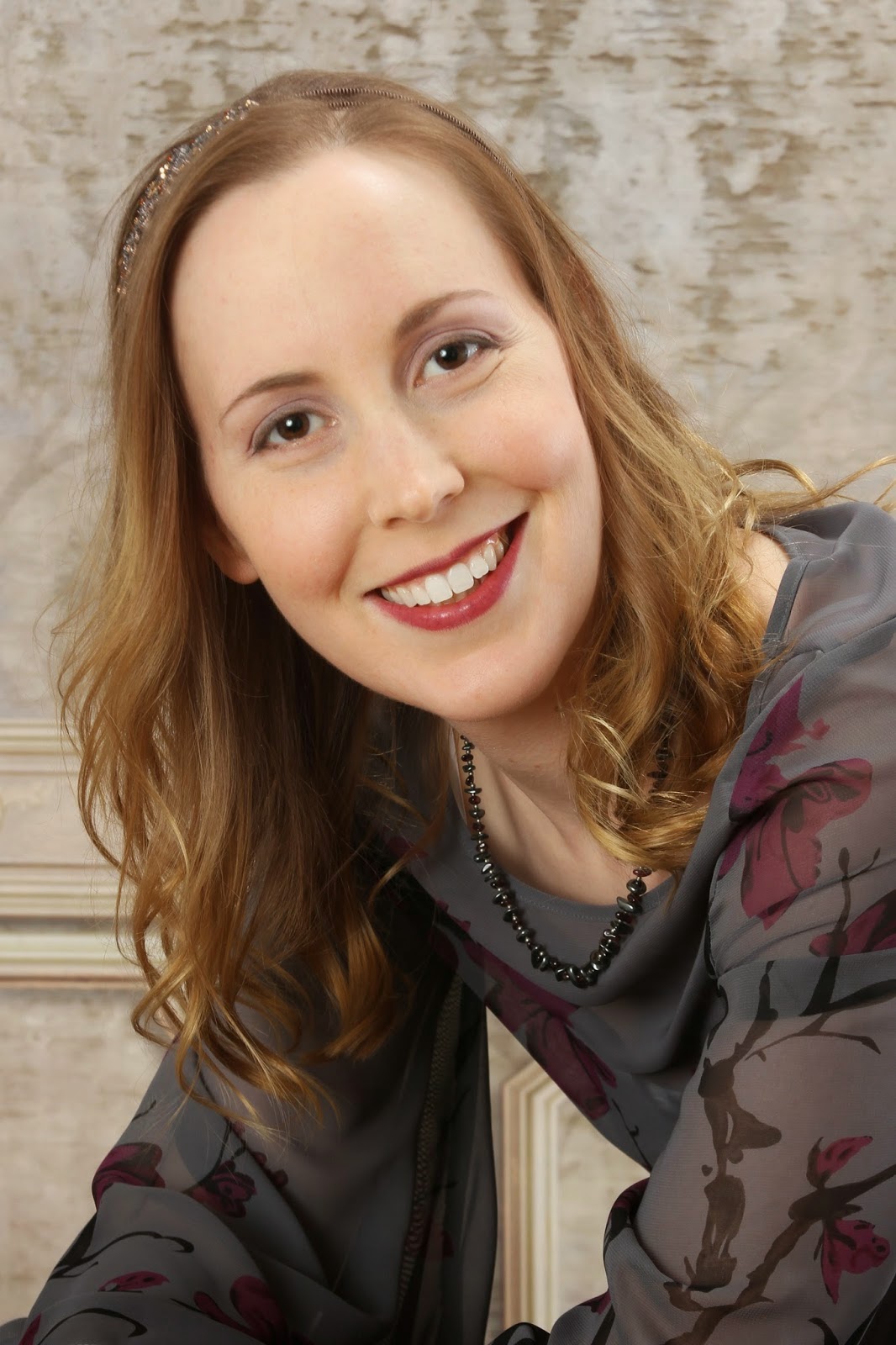 TT: So there's like a million things I want to ask you, but first let's get everybody up to speed: how would you describe SCHISM to somebody who hasn't already heard about it?

LM: Oh boy, the hard questions first! For easy comparisons, if people watch anime, I say it's like Fushigi Yuugi meets Fringe because there's a portal story, but it's also based in quasi-science. The whole concept is that Gabe lost his memory in a car wreck, so he doesn't know he's from a parallel dimension. He meets a girl named Lea who's desperately trying to prove that world exists so she can get proof of the people who live there and free her parents from a mental institution. You can see where this is going.

TT: Man, if I had a dollar for every cute guy who fell out of an interdimensional portal...!  And actually, I'm glad you mentioned the boy-meets-girl part, because I'm legit curious, here: how would you say the romantic element is affected by having these fantasy elements in the story?  Like, how did that change or complicate your writing of Gabe and Lea's relationship?

LM: The fantasy elements give me much more ammunition to fire at their relationship. Wait, did I say that out loud? Seriously, that's why I love fantasy. In the real world, there's only so much that can go sideways to mess up a courtship, but throw in a fantasy culture, taboos, obligations, kidnapping, megalomaniac jerkwads, and you've got a much harder time hooking up then the two kids on campus trying to figure out who wrote those awful notes about them on the quad.

TT: Haha, aMEN!  Characters, meet author.  Ants, meet magnifying glass.  Well, and speaking of the campus quad (and speaking AS someone who's never attempted anything of the sort), I was wondering: what inspired you to do the NA college setting, rather than straight YA?  Is there a major difference in the characters and writing, or was it more about story-logistics?

LM: It was a mix of things. One, the first place I came up with the idea, I was attending college at the time. I also realized I rarely read books starring college students. This was in 2002 before the big NA boom. There's also some major story logistics that made me have to age them that old. Lea needed enough knowledge of physics to realistically do her research, and Gabe ends up in a position of authority, so he had to be over 18 in my mind.

TT: 2002?! Holy mackerel, Laura - your book is almost old enough to *read* YA! Let's talk about that for a second: what was the journey from then 'til now?  Did you repeatedly rewrite and reboot it, or was this more about blowing the dust off and giving it a recent, radical revision?  (... that's a lot of Rs...)

LM: Oh, please don't think I've been writing and re-writing this book that long! No, I started it as an idea for a graphic novel and did all my world building and stuff, then forgot about it. Then years later, I wrote the first few chapters in a NANOWRIMO attempt, and floundered out again. In 2012, a good friend and I were talking about books we liked, and I somehow got onto the idea of my story. She was really excited, like REALLY excited. I thought "hey...someone would want to read my story. Maybe other people would too." And then I legitimately wrote a full draft, attended a writer's confrence, did my research, rewrote a bunch, got it edited, and NOW we're at today.

TT: Hey, I am ALL ABOUT today!!  So let's stick on the graphic novel part: one of the things I'm really looking forward to is reading about Gabe's art, because I know that you yourself studied it, and it's so cool when an author uses their own real-world expertise in a story like this.  How did your drawing background help the story take shape?  Or what other pieces of real-world you will we find in there?

LM: I was a drawing minor at UNT, so it was easy to weave that into the story. I know he'd have his box of art supplies, or be hauling around a gigantic portfolio to and from the building, so there's a few touches like that. As for the real world, much of the story is set at UNT in Denton, TX. Gabe lives in Bruce Hall, and they mention the weird thing about the art building's non-existent fourth floor, but totally real staircase to it. Scenes take place in the Auditorium building, they meet at Cool Beans once. There's lots of Easter eggs for Dentonites.

TT: Ahh, NEAT! My sister went to UNT back when the original albino squirrel was still around - that is so cool that you worked all that local flavor in there!

TT: And actually, while we're thinking about those kinds of unique features, here's a question I always like to ask: what do you think people will find special and unique about SCHISM?

LM: They say there's "no new stories" and that all the plots have been done, so it's hard to claim unique there. And truly, everyone likes to think their worldbuilding is unique, but I won't kid myself. If you look hard enough, I'm sure you can find lots of stories with bizarre skin colors and strange features. What I think SCHISM has is a neat touch to dialogue, or at least I think that's my strength. Whether it's the humorous sections or the dramatic ones, there's lines in there that'll stick out.

TT: Ahh, that's what I like to hear - and from the excerpts on MuseItUp's website, I daresay you're right! And y'know, I think you're in a better position to judge than most authors - I mean, as an editor, you must go through tons of manuscripts every month!  What's that like, anyway?  How has wearing the senior-editor hat for Anaiah Press affected your writing?

LM: Well you know when all your critique partners tell you to put the action up closer to the front of the story? They're right. It's made me realize how important a strong beginning really is. No one is going to just "give it time" for the story to develop. And if they're confused at all, they'll put it down. I think I instinctively know to better place my openings now that I've read so many.

TT: Hang it up! Preach! So many of the writers at our workshop struggle with that too (and I include myself in that!) Well, last question, then: you've worked so hard to give us a kickass beginning with SCHISM, but I know the story's not over there.  What's the forecast for UNITY, and how are the two connected?  (Are you gonna make me hurl the book at the wall with a final-page cliffhanger? :) )

LM: *hides in the corner* It's not so much a cliffhanger as a "oh crap, what now?" kind of ending. It comes to an end, but the main conflict is certainly not resolved. It's not so different from One Night in Sixes in that way I suppose, if I'm allowed to compare myself to greatness. UNITY picks up three months later, and keeps picking up pace until the end. There's a great deal of drama, so it lacks some of the humor SCHISM has in it. Like my inspiration show Fushigi Yuugi, the first season is happiness and butterflies, and the second...not so much.

TT: Dammit, Laura, if you kill my favorite celestial warriors, I WILL call your house at 2 AM and make you console me!


So there you have it, people: don't be deceived by Laura's sweetness and light as she plots to mutilate your emotions, but do set your alarm, stockpile your reading-minutes, and put your name in the gift-card giveaway hat, cuz SCHISM is going on sale tomorrow!