Calvin and Hobbes and Onfim

You know what was cool?

Actually, let me back up: you know what was cool, if you read the comics pages of American newspapers in the eighties and early nineties?

And if you didn't, the short story is this: Calvin is a six-year-old boy with a stuffed tiger/best friend named Hobbes, and an imagination the size of a small galaxy.  They went on all kinds of adventures, and the strip would regularly switch back and forth from the lush, well-illustrated world of Calvin's imagination, to his rather less impressive reality.  Thusly:

It was a fantastic comic strip for so many reasons, but part of its enduring appeal is how it hilariously, astutely, lovingly renders a child's world.  It was a huge part of my own childhood, and I have no doubt that it's going to keep its place in our cultural memory for a long time yet.

Anyway, fast forward to today, when my Twitter feed (and my buddy Daniel Bensen, of Groom of the Tyrannosaur Queen fame!) turned me on to this little gem here:


This is a replica of a birch-bark drawing done by a boy who lived in 13th-century Russia.  It's part of an article called The Art of Onfim: Medieval Novgorod Through the Eyes of a Child.  I'll let the author, Paul Wickenden, explicate this drawing here:

Onfim was being taught to write, but he was obviously restless with his lessons and when he could get away with it, he intermixed his assignments with doodlings. In this first example, he started to write out the first eleven letters of the alphabet in the upper right corner, but got bored and drew a picture of himself as a grown-up warrior impaling an enemy with his spear. To remove any doubt about the identity of the warrior, he even labeled the person on the horse as "Onfim."

This is without a doubt the sweetest, funniest, most touching thing I've seen in weeks.  I just can't tell you how it delights my soul.

Well, maybe I can.  Look at this one here:


This one has a spelling lesson at the left, with a picture of Onfim's mother and father at the center.  And to me it's just, like, massively enchanting to drink in all the little details.  Compare this drawing to the one above, and notice how they differ from our modern preschool/Crayola iconography.  Do you see how the nose is always a straight line, making a perpendicular cat-like connection to the mouth?  And how the hands don't look like little three-fingered brooms, but like rakes?  I'm no art-ographer, but I wonder if those outward bulges above the arms are shoulders - and I ADORE that horse.

So I guess if there's a point lurking anywhere in here, it's this: it's easy to understand intellectually that all societies have some things in common - that as long as there are people, there will be six-year-old boys who get bored and fantasize about having great adventures.  But it's not until you really see a little scrap of the past up-close and personal that the tiny, telling differences become apparent, and you can see that boy as his own separate, entire person - a human being in sharp focus, and a startlingly intimate connection to a world that no longer exists.

I want this.  I covet this.  I can't think of any greater success in storytelling than being able to bank-shot a character off of that backboard of differences - race or time or culture or gender or whatever - to land right back in the reader's lap.  And I'm starting to think that fantasy - be it ever so dinosaurs-in-fighter-jets humble - is a genre custom-made for doing just that.


These are the voices of the dead - an extinct culture - to which everybody is a little bit deaf.
Tex at 8:00 AM 4 comments:
Share

The Joys of Being a Pre-Published Author

So I ended 2013 on a kind of a downer.  Not too long after, my good buddy Kyle wrote a blog post noting that a lot of new authors seem to be really in the pits about their chosen profession - that it seemed to be one giant skin-thickening, loin-girding, expectations-managing protracted flinch.

I would be lying if I said I were in a happy mental place at the moment.  But I think that has less to do with the world of publishing than the fear of losing control.  After years of working on this thing, the window of opportunity for changes and improvements is finally closing.  Soon it'll be fixed, unchangeable, all its flaws immortalized in amber, and my role will move from all-powerful author to diligent cheerleader.  The baby is going off to college, and who knows what'll happen when it gets there?

Anyway, I wrote an article a couple months back called Five Secret Advantages of the Unpublished Author.  I wanted to do something similar here.  Are you ready?

The Joys of Being a Pre-Published Author

That's it.  To be clear, there's a million and one happinesses I could rattle off: receiving the ecstatic "we got one!!!" email; going out to dinner with agent and editor; dropping The Big News to friends and family one at a delicious, savory time; getting awesomesweet cover art; that first check in the mail.  But those are all fruits falling from one singular tree, called External Validation, otherwise known as My Writing is Officially Worth Something Now.

That's the gold nugget I keep in my pocket, the solid reliable center of this whole huge hurricane of insecurities and what-ifs and things completely outside my control.  Even if God visits Job-like misery upon me - even if my publisher goes broke, my agent drops me, my reviews suck, my book tanks, and my name becomes so toxic that I have to spend the rest of my life writing under a pseudonym - the fact remains that something I wrote was good enough that somebody wanted to represent it, and somebody else wanted to pay me money for it.  That is the one beautiful, permanent, no-takebacks talisman that will forever shield me from the insidious brain-spiders of doubt.

And man - for all of you guys who are striving on the traditional publishing path, let me tell you: having magic ego elf-water is AMAZING.  It is holy and potent and lasting, and I so hope that you will pursue your craft and persevere through rejections and doubt to get you some.

(And for the record, this is why you will never, ever hear me slag off self-published writers.  To put yourself straight out into the world without needing someone else's prior approval, to sustain yourself on faith in your own ability - on the self-esteem equivalent of photosynthesis! - is a feat more amazing than I ever had the guts to attempt.)

Anyway - keep at it, fictioneers, regardless of your chosen form or flavor.  It's a hell of a quest, no matter where your road takes you.

A Writer of the Imminent Future

"Self," I said, "we really need to get a new blog post up.  The Prius thing is making us look like even more of a self-perpetuating stereotype than we actually are."

Then the phone rang: a very nice person was calling to tell me that my short story, "Hell Bent", had taken an Honorable Mention in the Writers of the Future Contest.

That in itself is not a world-changing event.  No cash, no Corvette, no tropical weekend getaway with Vanna White.  (Though I absolutely recommend the contest to any of you speculative fictioneers out there - it's fun and free, not to mention potentially lucrative, and has minted more titans of SFF than you can shake a Klingon painstick at.)

But damn, I am pleased.

One of the things that really eats my self-esteem is that I write SO. DANG. SLOW.  Like really, unconscionably, Sarlacc-digestion-speed slow.  (That 1,500 words thing has been taking me five or six hours a day, and I'm still failing regularly.)  There are so many people at my kickin' awesome workshop who just knock stuff OUT - who have a new chapter to read every Wednesday without fail, who are constantly submitting this here and that there, while also revising three more stories at the same time and probably flipping omelettes while they type.  I even know a guy who's writing a short story a week.  Every week.  For a year.  And yet he somehow still has time to go out to the bar, and I KNOW that cuz I saw him there last week!

I know I need to pick up the pace.  I'm sure I'll get faster if I keep at it.  But in the meantime, it is awfully encouraging to know that this little thing - my one and only short story, the one I spent 100+ hours researching and revising and workshopping and polishing - actually got somewhere on the very first try.

Needless to say, thanks hugely to all of you guys who helped to sand down the edges.  I think I'll try to send the little darling somewhere else, see if it can't win a place in a magazine somewhere.

In the meantime, and just in case you're interested, the opening scene is below the cut.  (Write Clubbers, this will not be new to you, though I owe you immensely for your critique!)

Requiem for a Prius

I know.  I know.  Here's me with all my tooled-up Western website, my Texan schtick, my still-not-as-wide-as-the-barn-door-behind-me rustic author photo... and I'm just gonna come out and say it: I drive a Prius.

Not sorry.  Around here, we like our Dr. Pepper, our big-ass belt buckles, and our even bigger-ass trucks... but I tell you what, that sweet white futuristic road-suppository was the best car I ever had.

But man, I am just all kinds of cut up about it.  I LOVED that freaking car.  Delivered pizza in it (and boxes of thawing chicken parts, and more sheet cakes than I can count).  Drove back from the casino at 2 AM with a cute drunk girl puking down the side of it.  Spent the night in it.  Always took it in real regularly for all its services and tune-ups and what-not.  And I tell you what: in all those hundred-thousand miles I had it, it never once left me on the side of the road.

To be clear: I'm not one of those people who gives their cars names and genders and personalities and all that.  It's still just the white Prius in my mind.  But man.  I TOTALLY GET how people get attached to their rides - shoot, to their toys and keepsakes and inanimate objects of whatever kind.  It's almost like, the less actual mind and personality something has, the easier it is for you to imprint your own thinking on it.

You know what I mean?  There's all manner of classes and therapy and daytime TV programs invested in helping you to tolerate the well-formed proclivities of the intelligent hominid you married (to say nothing of the ones you subsequently progenated).  With little furry friends, you have a bit more room on which to write your mental fan-fiction version of their personalities.  By the time you get down to fish and turtles, you're pretty much stumping the whole thing.

So I guess it's not surprising that we can still see characters in the noble steeds of the 21st century.  Maybe it's kinda hard for your constant adventuring companion to avoid growing a little bit of a soul, whether it's well-gummed teddy bear or a two-ton road warrior.

At any rate, perhaps you will indulge me while I eulogize mine. 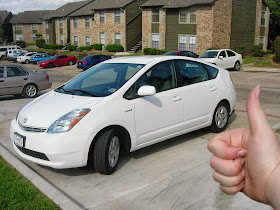 Goodnight, sweet Prius.  And flights of angels drive thee to thy rest.