Have you ever seen one of those stories where the hero or heroine gets, like, hit by a bus or something, and goes to an ethereal magical neverland, where everything is perfect and pleasant and they could totally stay there forever, if only they didn't have to return to the land of the living and finish the plot?

Well, let me tell you, ladies and gents: that land is real.  It's my aunt and uncle's house here in Everett, Washington.

We always came here in the summers when I was a kid, and this is the first one in a few that I've been able to get back for any length of time.  It always seems to be perfect here: the house is airy and sunny and breezy and cool, with a big deck for barbecueing and a basement full of bikes and canoes and rafts for adventure time, and a couch custom-made for napping.  This is the backyard, if you can believe it.


I guess one of the reasons it's such a fun place to be is that when I'm here, my daily grind has been left behind (along with my earthly body, sprawled out in front of that 3:44 cross-town express.)  Right at this exact moment, I'm enjoying a four-day intermission between super-awesome writers' conferences (more on those soon!), and I just can't express how much I've enjoyed floating in this blissful embryonic sac of family and free time.

I do get tangled up in other thoughts sometimes - you know, about how many less fortunate people in the world don't have a place like this, or what's inevitably going to happen to this one as folks get older and things change.  But it's amazing to me how much more revved I feel even after just a day of being here.  Shit I can barely force myself through at home suddenly seems SUPER DOABLE, in a breathless ecstatic "let's get this knocked out and then walk down to the beach and build sand castles and toast hot dogs and skip stones 'til the stars come out!" kind of way.

Obviously it's not so nice all year round.  And of course all the vacation-time vibes would vanish if I ever picked up stakes and moved here.  In a way, this place is too special for me to actually live in it.

But boy, I would be so relentlessly productive if working hard and staying on task meant that I could leave my Texas "office" at 6:00 and have three hours of this every night.

Anyway, so that's my magical happy near-death neverland - what does yours look like?

Hey guys!  I'm sorry it's been such a godawful-long time since I did anything around here.  That is about to change with a quickness (with a *fierceness*!)  But as I hop a plane for sunny Santa Monica (and then super Seattle, and then perfect Portland!), my good buddy Patricia Lynne is here to help us out in the meantime.

"Patricia who?" say you.

"Patricia SCHOOLS YOU," say I.

Well.  Maybe not you - you seem pretty on top of things - but listen up: aspiring writers, you need to follow this lady.  She is without a doubt one of the most organized, friendly, relentlessly productive and enthusiastic e-people I know.  If I'm the neighbor with grass growing only out of the broken toilet in my front yard, she's the one showing up to your front door with a pan of brownies and an invitation to join the local roller derby. And it's my privilege to heft myself out of my beer-stained lawn chair to help her celebrate the re-birthday of her second novel, Snapshots.  Take it away, P-Lynne! 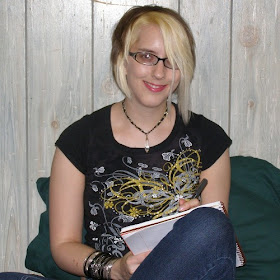 I had a problem when it came time to publish Snapshots. What genre did I put it in? Unlike Being Human, the story didn’t fit easily into one genre. It has little bits of genres here and there. Finally, I had a friend suggest Speculative Fiction.

Of course, my response at first was: Huh? What's that?

Given my lack of knowledge I turned to Google for the answer.
Speculative fiction addresses fiction that includes Weird Tales, Amazing Stories, and Fantastic Fiction. It also may include other genres, such as Mysteries, Alternate Histories, and Historical Fiction. Speculative fiction can be a collective term to describe works of science fiction, fantasy, and horror and also addresses works that are not science fiction, fantasy, or horror, yet don't rightly belong to the other genres. - source.

A little bit down the page, it said this: When you've come across a story or movie or game that both is and isn't science fiction, fantasy, and/or horror, then you've discovered speculative fiction.

That describes Snapshots pretty well. It is Sci-fi, but at the same time not. The sci-fi elements only come into play near the end and they don't directly drive the story. There are other elements that make it fit into Speculative Fiction. Cyc has a power and is stronger and faster than the average human. But he's not paranormal or supernatural.

I will admit that I was uncertain about using the term. After all, I had to Google it. But just because I hadn't heard the term often doesn't mean other readers haven't either. One thing is certain, when talking about Snapshots the thing I say the most is, "It's NOT paranormal."

My name is Cyclop Blaine and I am a real person.

I am a real person: heedless of a childhood spent under the supervision of an old man I only know as Master.

I am a real person: regardless of my teenage years bound by violence as the adoptive son of the Victory Street Gang's leader.

I am a real person: despite the visions I see in others' eyes. Snapshots of their futures.

“You will cower before me.”

I am a real person: my life will be my own. I belong to no one. 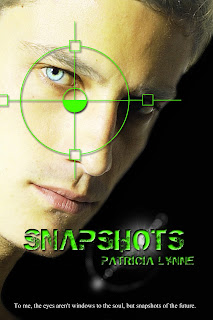 Patricia Lynne never set out to become a writer. In fact, she never considered it an option during high school and college. She was more of an art and band geek. Some stories are meant to be told and now she can't stop writing. Patricia lives with her husband in Michigan, hopes one day to have what will resemble a small petting zoo and has a fondness for dying her hair the colors of the rainbow.
Tex at 12:44 AM 5 comments:
Share

Hey, guys - and if I haven't said it yet, thanks so much for all your great suggestions for grammar posts.  Let's blow the dust off these kitties and get back to work!

My lovely assistant Willow will now help me select a letter from the mailbag. 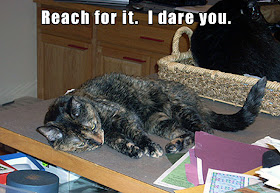 ...on second thought, let's pull one from the blog comments.

"I don't really know the name for this, but proper subject/object usage of a pronoun at the end of a sentence.

A terrific question, is it not?  This thorny problem has blown the minds of generations of writers.  (Maybe I shouldn't be amazed, though - Matt's never shied away from the tough stuff.  If you are a fan of sci-fi/fantasy, gaming, and/or the progressive politics of geek fandom at large, his blog is unmissable.  Check him out - and in the meantime, get those pinkies in the upright and locked position.)